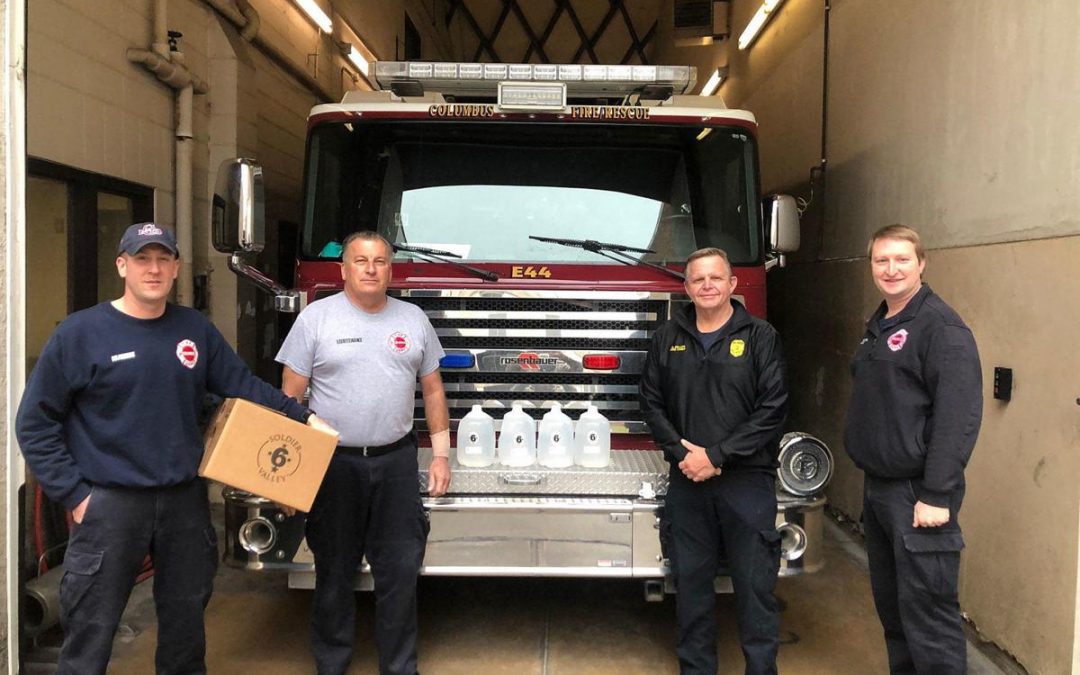 Columbus Fire Chief Dan Miller wasn’t all that surprised when he found out the department was receiving a donation of sanitizer late last week.

Helping one another in whatever way we can, Miller said, is typical of Nebraskans.

Miller and his fellow firefighters and their counterparts at the Columbus Police Department were lent a helping hand in staying safe in the era of a pandemic.

Short on sanitizer needed for disinfecting the office and while out working with the public each day, a local business relationship helped fill that need with a recent delivery.

Soldier Valley Spirits out of La Vista, like many distilleries across the nation, has converted much of its production since the outbreak of COVID-19 to making sanitizer rather than crafting its normal glass canteens of whiskey, bourbon, rye, vodka and rum.

Gallons of the sanitizer was transported by a local businessman back from the Omaha area then dropped off, no contact, to the police and fire stations. Both hadn’t quite run out yet but were dangerously close to liquidating the remaining supply.

“It’s touching, but at the same time, it’s a very Nebraska-like thing to do,” Miller said. “We’re very grateful for having Nebraskans step up and provide for us in times of need.”

Patriarch Distillers, which produces Soldier Valley Spirits, has been in operation for over six years. The business is the dream of founder and president Jeff Hadden. He and his vice president of sales and marketing, Rich Hagedorn, became friends decades back through mutual friends in the Army National Guard. Both are U.S. Army veterans.

Hagedorn once did business with a local Columbusite who makes hunting blinds, Jeff Mullinix. The latter fitted a blind for Hagedorn’s boat.

The two have been friends since then thanks to a shared love for hunting. Mullinix reached out to Hagedorn to ask if Patriarch had been in touch with Columbus fire and police and set up a delivery and drop off. Mullinix’s friend Russ Strehle made the no-contact deliveries.

“When everybody’s unsure about the world and what’s happening in the world today, it’s nice to know you’ve got a business that’s willing to set aside their regular processes and do something just for the good of the people of this country,” Columbus Police Support Services Capt. Todd Thalken said. “We had a standing order for more sanitizer but really had no way of knowing if that was being filled or would ever be delivered.”

Miller and the fire department were in a similar situation.

“We’d certainly like to thank Jeff Hadden and Rich Hagedorn at Patriarch Distillers in La Vista. It very much speaks to the innovation of the private sector in the United States. It’s a very unique situation that we have here in this country,” Miller said. “I’d also like to thank Russ Strehle and Jeff Mullinix of Columbus for transporting and making it happen today.

“We’ve been trying to order it for that last two or three weeks, and it’s just unavailable. It’s on backorder everywhere work. We potentially had some coming in next week from a source, but not even that was 100 percent.”

Hadden has been in the liquor wholesale industry for over 20 years. In his personal time, he started experimenting with fermentation and distilling in 2002, storing away his own whiskey and bourbon. Two years later, he and Hagedorn visited Jack Daniels distillery in Lynchburg, Tennessee where Hadden was inspired to go into business on his own.

Officials at Jack Daniels encouraged Hadden to follow his dream, thanks in large part to the supply of corn readily available in Nebraska.

It took until 2011 for the dream to be realized. Hadden designed and patented a liquor bottle shaped like a World War II canteen to make his product recognizable then named it Soldier Valley after his father’s hometown in Iowa.

Every Hy-Vee and Walmart in Nebraska have Soldier Valley Spirits sitting on the shelves, as do businesses in 26 other states and the Navy/Marine Corps Exchange.

A portion of every bottle sold is given to a nonprofit veterans group.

Last Thursday was also the day Hagedorn delivered 106 gallons of sanitizer to the VA Hospital in Omaha. All of the sanitizer drop-offs and deliveries are free thanks to donations of the material needed for the sanitizer-making process. Patriarch also made sanitizer for Children’s Hospital and is focusing on supplying first responders.

“A couple of weeks ago, we saw that there were other distilleries around the country doing this. We made a few phone calls, and once the government lifted some restrictions on product made now that are not taxable through the (Alcohol and Tobacco Tax and Trade Bureau), it was game on,” Hagedorn said.

A company in Mead donated the hydrogen peroxide, Hiland Dairy chipped in containers and “it really started snowballing,” as Hagedorn put it.