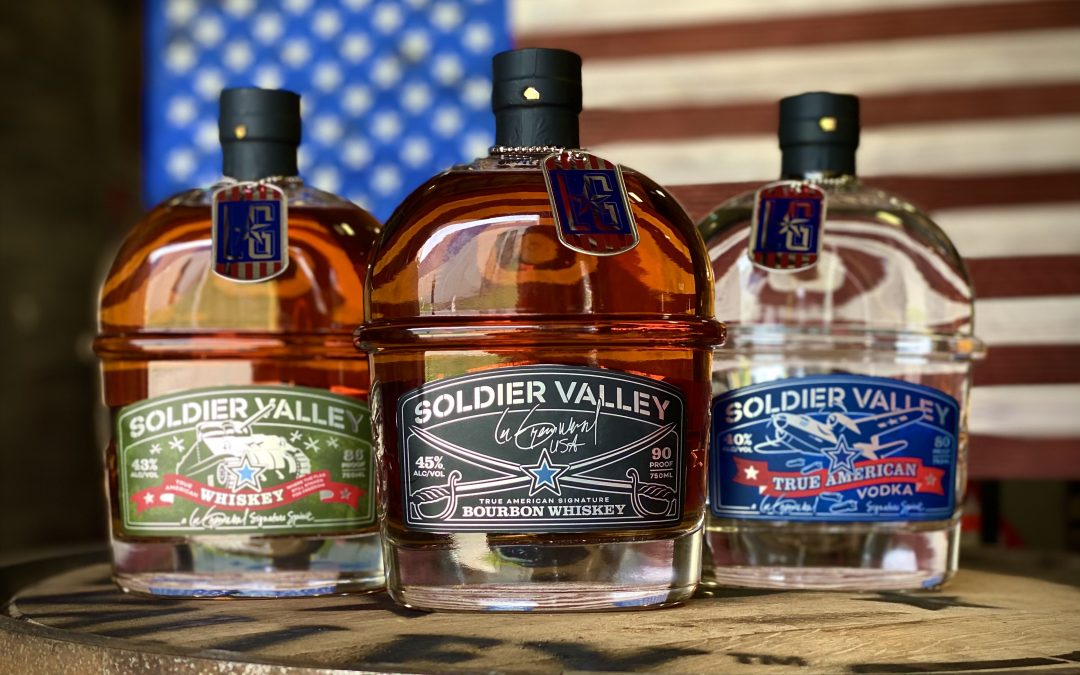 OMAHA, Neb. – America’s patriot Lee Greenwood, known for his beloved anthem “God Bless The USA,” is rolling into the Memorial Day holiday ready to help raise awareness and money for various veteran organizations. As previously announced, the Lee Greenwood Signature Bourbon will be arriving in stores across the United States starting this Memorial Day 2021 weekend. In addition to the bourbon, Soldier Valley Spirits along with Greenwood have announced the development of ‘True American Vodka’ and ‘Whiskey’ both a Lee Greenwood Signature Spirit.

All spirits are in a canteen-shaped bottle embossed with the number “6” and include a hanging military-style dog tag showcasing the letters “LG”. Wondering what that “6” embossed on the bottle means? The “6” on every barrel and bottle is a constant reminder that we always have each other’s backs! Just like on a clock, the stars represent nine, twelve, three, and SIX. This is especially true for our veterans and the nonprofit veterans’ groups and first responders we support.

“This is an incredibly special weekend. First off, we remember all the veterans that have sacrificed for all our freedoms. Secondly, the official launch of my spirit line is happening,” says Greenwood. “I never imagined that I would have a vodka, whiskey, and bourbon with my name on it and, at the same time, help raise money and awareness for some great veteran organizations. This weekend is truly a memorable one for me.”

“We at Soldier Valley Spirits celebrate and honor U.S. veterans who have served our great nation and this Memorial Day weekend continue with that tradition by releasing the new Lee Greenwood Signature Spirit line, which will raise money for some worthy veteran charities,” says Jeff Hadden, founder of Soldier Valley Spirits and Patriarch Distillers. “Having served in the US Army, I understand the dedication of our armed forces and will always have the utmost respect for their service.”

About Lee Greenwood:
Throughout his expansive career, international country music icon Lee Greenwood has earned multiple CMA and ACM Awards, a Grammy Award for Top Male Vocal Performance on “I.O.U,” in 1985, and a multitude of other prestigious awards nominations. His discography includes twenty-two studio albums, seven compilation albums, seven No. 1 hits, and thirty-eight singles including songs like “It Turns Me Inside Out,” “Ring On Her Finger Time on Her Hands,” “She’s Lyin’,” “I Don’t Mind the Thorns if You’re the Rose,” “Dixie Road,” “Somebody’s Gonna Love You,” “Going Going Gone,” “You Got A Good Love Comin’,” among others.

His stand-out hit “God Bless the U.S.A.” has been in the top five on the country singles charts three times (1991, 2001, and 2003), giving it the distinction of being the only song in any genre of music to achieve that feat. It reached the Top 20 of the Billboard Hot 100 chart shortly after 9/11. Known for his stand-out patriotism and support of the U.S. military, Greenwood has been honored with the Congressional Medal of Honor Society’s National Patriot’s Award and entertained troops on more than 30 USO Tours.

Greenwood was appointed to the council of the National Endowment for the Arts in 2008 by President George W. Bush, confirmed by the United States Senate, and continues to serve on the NEA at the pleasure of the President. His latest book release is a children’s book called Proud To Be An American, which is currently available at leegreenwood.com.

About Soldier Valley Spirits:
Soldier Valley Spirits and Patriarch Distillers follow the core values of faith, family, and service to the country. Family is the foundation of the business. It not only encompasses the familial ties established through blood and marriage, it also represents supporting each other by working together to create the best products possible. The name Patriarch embodies the vision of the company’s commitment to family. Patriarch is a term that means the head of the family. The company name honors our Midwest parents and grandparents who have always put faith, family, and country before all things.
# # #
Suggested post:
.@TheLeeGreenwood & Soldier Valley Spirits @PDistillers develop & announce the Lee Greenwood Signature #Bourbon #Whiskey #Vodka